Mabrook has been a hardmusic lover since his teens.
In the year 2000 he discovered the Hardcore Rave Parties near Toulouse (South West France) and he fell in love with the creation and the mixing of this hardbeat music: Hardcore Techno.

At first he tried his hand at some hardwares and softwares to make a live act but in 2005, he went to London and started mixing. On coming back to France he entered the PSKT (Psychotrak) Family to share his passion and organize lots of raves in the south of France.
In 2009, his friends from his sound system asked him to take the decks in a club party and since then, he has
played in a lot of gigs in France (mostly near Lyon) and sometimes outside France (Switzerland, Spain and Belgium).

At the beggining of 2013, he started production with a good friend: Adrenokrome, who helps him to improve and to create his own style of hardcore and share his vision for this music which is his whole life. 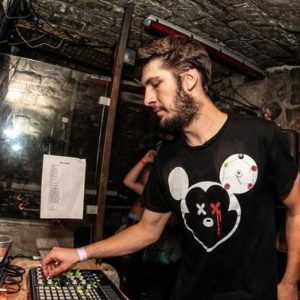